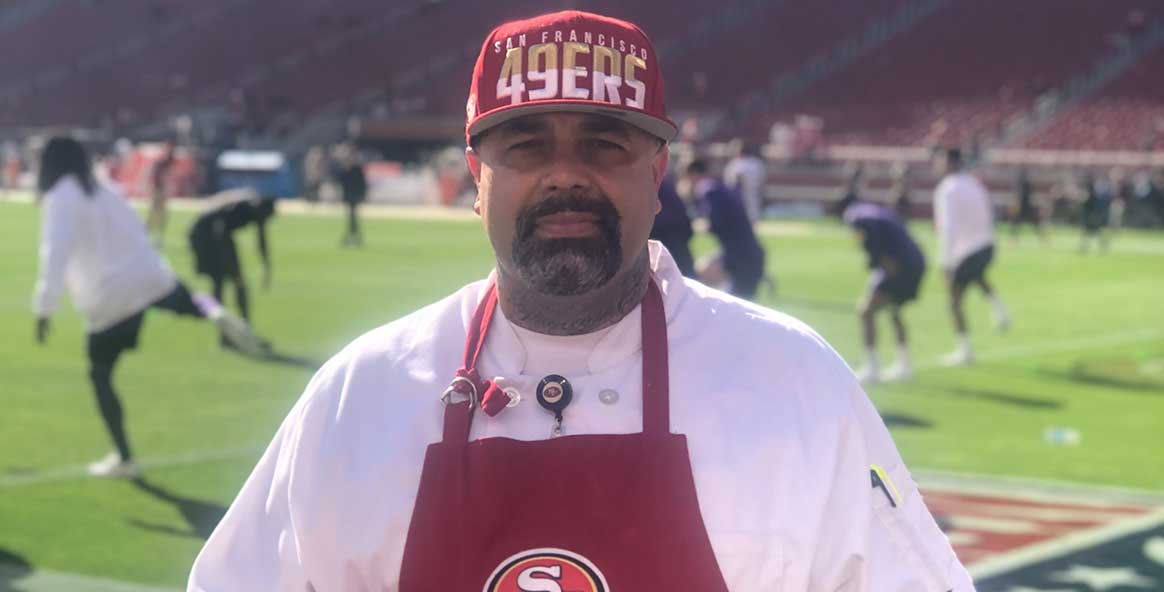 This story is a part of Levy’s Heart + Hustle series, a collection of stories recognizing the care and compassion with which Levy team members serve their communities, as well as the innovative ideas and inventive spirit our people bring to the table each and every day.

It was a normal day in 2021 for William Couch, who reported for his shift as Lead Cook at Levi’s Stadium for a corporate holiday party the venue had scheduled that day. William was working one of his favorite assignments, the carving station, where he took pride in slicing the perfect piece of tri-tip and serving guests with a smile. As the evening went on, many guests visited William’s station and remarked how incredible the food tasted before heading back to their seats. It was a fun, vibrant atmosphere – up until the moment Willliam sensed something was wrong.

William looked up from his station and saw a guest standing up from her seat, in a panic.

Immediately, he sprung into action.

“I’m really cautious of my awareness and surroundings,” William remarked. “It’s just how I was brought up. I noticed her distress, and the next thing I knew, I could see the gentleman was already gasping for air. At that moment, I just knew I had to act.”

Wasting no time, William ran over. He performed the Heimlich maneuver, successfully keeping the man stable long enough for medical professionals to arrive on the scene. In the days after, William was called a hero for his calmness, decisiveness, and bravery in a moment that left many others frozen – it’s a label he disagrees with.

“I don’t really consider myself a hero. I was blessed to be in the right place to help someone out. I’m thankful that I was able to stay calm and think clearly, but I really just did what needed to be done. I never expected anything in return.”

To truly understand why William felt compelled to act on that day, it’s crucial to understand his story. From a young age, he always felt a sense of serenity when he was cooking. With both of his parents living with disabilities, it was often on William and his grandparents to take care of things around the house. As the years went by, cooking became a therapeutic experience for him when life felt overwhelming.

“My grandma would just put me in front of the stove and tell me what to do,” William remembered. “When I’m in the kitchen, it puts me in the zone and holds me down. Now, it’s become a passion of mine.”

As William grew older, he began struggling with addiction, which led to a string of bad decisions that ultimately took him away from his wife and daughters. He says his lowest point came when his family expressed that they needed him to change his ways.

“They told me that I needed to get better so I could be there for them and be the father that they deserved. In that moment, I made a promise that I would never again do something that was going to prevent me from being with my family.”

After that day, William entered treatment for addiction at a clean living home. Shortly after getting settled in there, he received a crushing phone call from his wife. One that even more firmly solidified the path he needed to take.

“She told me that two days after I got there, the place where my family was living caught on fire,” William said. “They weren’t able to get my daughter Mariah out. That forever changed my journey. It’s a pain that I can never explain and it’s always going to be there.”

William has now spent the better part of a decade charting a better path for himself and his family. Outside of being a cook at Levi’s Stadium, he also works as a program manager at Blackbird House, an organization that helps people going through mental health crises, and a house manager at a facility similar to the one that helped him years earlier.

“I wasn’t always the person I am today,” William reflected. “I’m coming up on almost ten years clean and sober, and ever since then, I’ve been in the service of helping people. I’ve been blessed to be in the position where I can give back and help others that are struggling or going through something in their life.” William with his children and wife Cecilia at Levi’s Stadium

Knowing all that has shaped the person William is today, it’s no wonder that in a moment where the world seemed to be moving in slow motion, he rose to the occasion. William credits the work he does with people trying to rebuild their lives as a key factor in his ability to act on that day, and feels strongly that he was put in that position by something bigger than himself.

“Most of the time in a crisis situation, people panic because they don’t know what to do. With the work I do in these kinds of situations every day, staying calm and de-escalating has almost become a natural kind of ‘spider sense’ for me now. It just felt like a higher power put me there to assess the situation and respond like that, so I reacted the way I’ve been trained to.”

After everything he has overcome and accomplished in the past decade, William now has a lot to be grateful for. His wife and children provide so much joy in his life, but he also feels thankful for the family he has found at Levi’s Stadium.

“Being with Levy at the stadium is amazing,” he said. “I love to be in the kitchen. I look forward to going to work, and being in that environment is just a great feeling. It makes me feel good to know how much joy we can create with the food we make.” Guests and team members alike know William as the person who always says, “it’s going to be a great day.” Most of the time, he’s bouncing around between different kitchens and hospitality spaces at the stadium, and he loves the camaraderie and collaboration that come from working in such a dynamic environment.

“I don’t look at it as anything other than we’re a team, and it definitely takes a group effort to make sure everything gets done,” William said. “All I can do is keep a positive attitude. If I’m doing my part and staying upbeat, it’s amazing how infectious that can be.”

For his life-saving efforts and positive attitude that has impacted so many at Levi’s Stadium, the San Francisco 49ers organization recognized William with the Golden Heart Award, an honor reserved for the rare case when someone goes truly above and beyond in their service.

“The last person they presented it to was a former 49ers player. As a die-hard fan, that was pretty cool,” William noted. “My wife’s never been inside Levi’s Stadium before that, so they had an award dinner and I was able to bring her and share that experience.”

True to his core, the best part of receiving the award for William was the experience it led to for someone else. William with his wife Cecilia