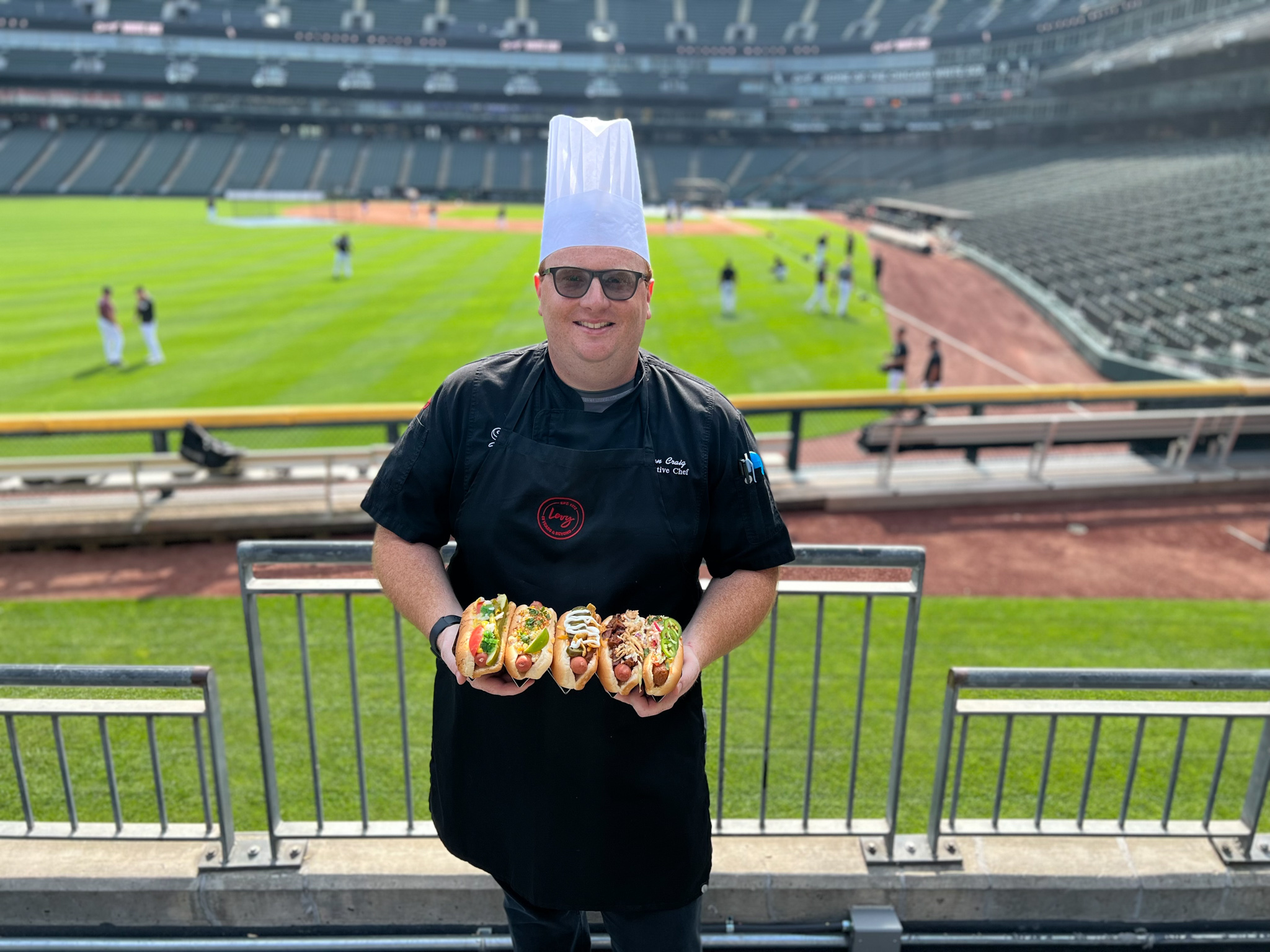 At Levy, we don’t think of hot dogs as just “the basics.” We got our start bringing fine dining to sports venues, but we’re here to stay because we put the same time, dedication and precision into the items that some may take for granted when they walk into a stadium. To us, hot dogs are more than just beef, buns and a controversial choice of condiments. They represent our core values of innovation and passion, the lifeblood of who we are as culinarians, creative minds and relentless perfectionists. With July marking National Hot Dog Month, we talked with Chefs Robin Rosenberg and Ryan Craig about how their creative hot dogs embody Levy’s culture and identity.

Hot dogs are usually thought of as something to be kept simple—our chefs view them as a challenge.

“When you make something generic and basic it could be delicious, but it’s pedestrian,” Chef Rosenberg says. “It’s not Levy.”

Whether it’s a hot dog or prime rib, both chefs agree that if they’re not looking for a way to elevate it and to make it special, they’ve already failed. National Hot Dog Month brings forth another exciting opportunity to put a twist on a classic and make it something extraordinary.

Innovators at our Core

In his role as Levy’s Vice President and Chef de Cuisine, Chef Rosenberg has learned a thing or two about innovation. Problem-solving and tweaking recipes are things he does every day, and there is no better display of creative thinking than the Hot Dog Panini. Before steamers, it was almost impossible to serve hot dogs in suites. The bun would get hard, the dog would dry out—it wasn’t up to our standards. So, Chef Rosenberg set out to create a premium hot dog option that would not only be packed with flavor, but would also stand the test of time.

After hours of brainstorming, experimenting and taste-testing, it clicked—a traditional hot dog wouldn’t work in this setting, but what if it was made into a panini? Rosenberg butterflied an all-beef frank, seared it on the chargrill, and added a savory blend of Swiss cheese, caramelized onions and dijon mustard to keep it moist and flavorful. After three minutes in the press, the bun was crispy, the cheese was gooey, and the Hot Dog Panini was born.

“I took something that existed and reinvented it,” Chef Rosenberg says. “That’s the best way to define our culture: We take something established and give it a twist.”

Some chefs may have settled for the easiest solution. Perhaps they would have recommended getting new equipment, or scrapping hot dogs in suites altogether. But that’s not how we operate here at Levy. The drive to innovate is what pushes us forward, it fuels us to get better, find something new and refuse to accept anything less than perfection.

Chef Rosenberg is the quintessential example of those principles. He experiments with hundreds of new products and recipes each year in his Innovation Kitchen, always looking for the next item that is going to make our guests’ mouths water. The Hot Dog Panini is no different. Rosenberg doesn’t see problems, he sees opportunities to create something special and new. That mindset is what has kept Levy moving forward and on the cutting edge of our industry. Passion for Everything We Do

Ryan Craig doesn’t just cook to cook—every dish he and his team create has a meaning, a story, an answer to the question, “Why?”

“Anyone can make a hot dog,” Chef Craig says. “But what can we do to elevate it? What kind of story can we tell with the great ingredients we put on it?”

As Levy’s Executive Chef at Guaranteed Rate Field, Craig has developed a special menu to celebrate National Hot Dog Month in the ballpark’s Vizzy View Bar, with each component telling its own unique story.

“We’re here to have fun and be creative,” he explains. “My passion is showing people that there’s a different way to experience something, maybe even something they already feel very familiar with.”

That passion shows up not only in the dishes served in the stadium but especially in the inspirations behind them.

The menu features five totally different franks for fans to enjoy: The Elote Dog, The Frito Chili Pie Dog, The Smoked Brisket Dog, The Vegan Banh Mi Dog and the classic Chicago Dog. While the inclusion of the Chicago Dog is a show of respect and admiration for the hometown culture, the other four represent completely new recipes that Chef Craig and his team used their culinary passion and technique to develop.

First up is the Elote Dog, loaded with creamy, charred corn and seasoned with tajin and lime juice for a citrusy, spicy amalgamation of flavors and textures. The dish nods to Mexican heritage in Chicago, a key influence for the chef representing the city’s South Side team.

“There’s a rich culinary tradition on the South Side,” Craig remarks. “It’s crucial to me that our menu reflects that.”

While the Elote Dog is a reference to his current home, the Frito Chili Pie Dog brings back fond memories of Chef Craig’s days in Oklahoma City. The hearty chili, sharp cheddar cheese, crispy corn chips and spicy jalapeños are loaded onto the dog and finished off with a healthy drizzle of sour cream, paying homage to a popular combination in the chef’s former home.

When Craig isn’t at the stadium, he enjoys cooking barbecue for friends and family, specializing in juicy and tender smoked meats. That joy is expressed in the Smoked Brisket Dog, topped with creamy coleslaw, fried onions and his team’s signature house-smoked brisket.

The menu’s final new creation, the Vegan Banh Mi Dog, is less an expression of culture or history, but more a window into Chef Craig’s culinary mission.

“To me, the most impactful thing I can do is expand people’s culinary horizons with this menu,” he says. “I’m always looking for the balance between trying new things, and hitting on a lot of the favorites that are synonymous with South Side baseball.”

With this plant-based dog, the goal was not only to be inclusive of those who don’t eat meat but also to expose fans to different cuisines and cultures that they may not have experienced before. The mix of daikon carrot slaw, Chinese mustard and jalapeño is one that is likely to be unfamiliar to some fans—but if they’re willing to try it, they’re in for a treat.

Whether it’s Craig channeling his creative spark into a one-of-a-kind menu, or Rosenberg refusing to settle for the minimum acceptable product, our chefs’ passion is uniquely evident in how they approach their hot dogs. Passion and innovation are central to who we are, and it shows in the food we serve. National Hot Dog Month is a time for our chefs to put their creativity and love of food into a dish we serve millions of each year, but don’t let that fool you. These pillars, along with being nice and creating inclusive environments, are tenets that we live by throughout the year. What truly sets us apart is our people. Their love for what they do and dedication to problem-solving will continue to open up new ideas and broader frontiers for many years to come. Happy National Hot Dog Month from all of us here at Levy!

20 Years Later: Back to the Beginning of Jake Melnick’s Corner Tap