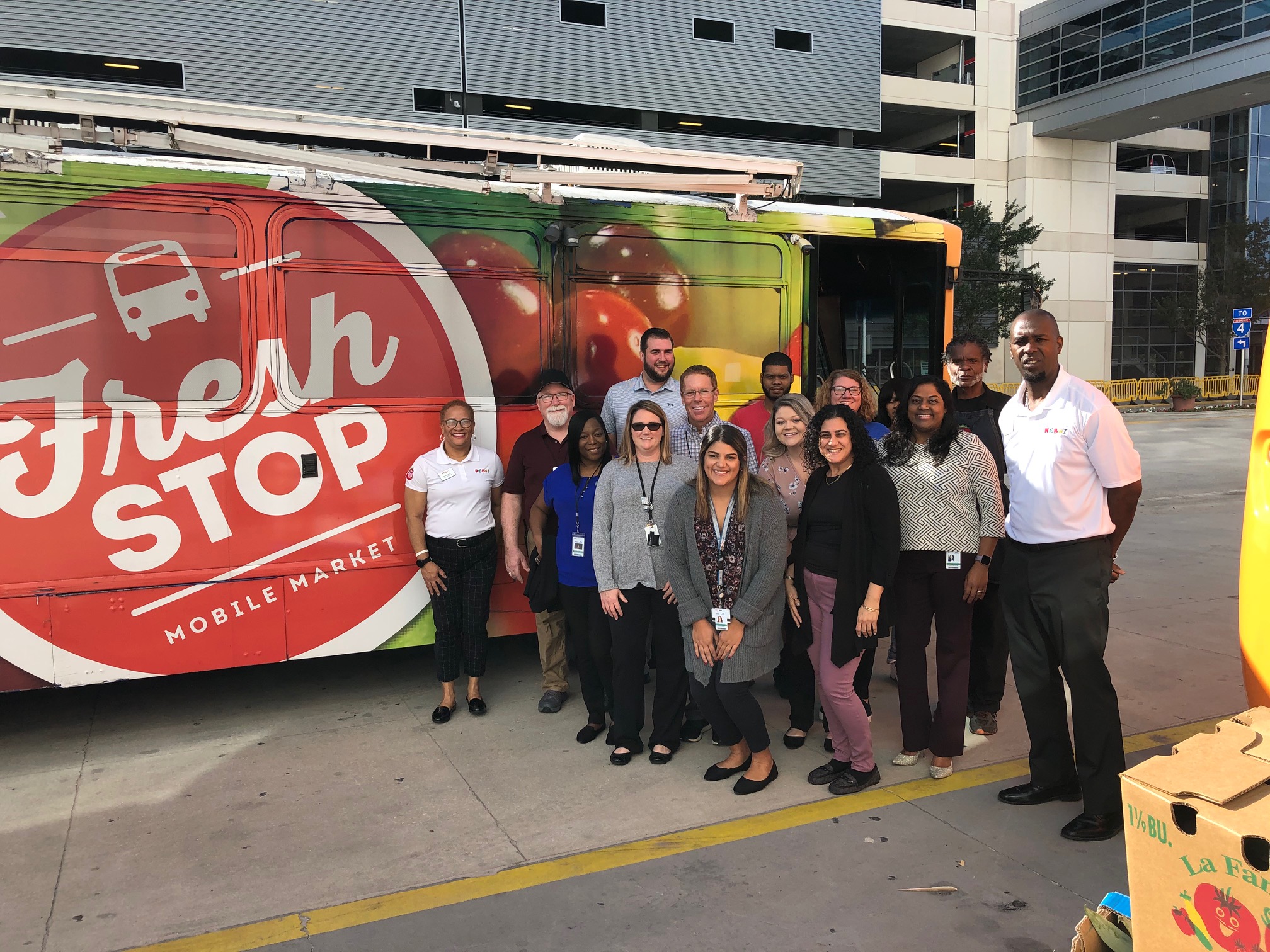 We always love learning about the impactful work our locations do in their respective communities throughout the country. From donating meals to families during the holiday season to various volunteering projects, there is never a shortage of inspiration.

That said, when we heard about the awesome work our teams at the Amway Center and Camping World Stadium were doing down in Orlando, Florida, we knew it was pretty special.

In the spirit of one of the biggest giving back seasons of the year, read all about the great work happening down in Central Florida and maybe even get inspired to do more in your own community!

Giving Back a Healthy Amount

Our Amway Center team gives back to their community in Orlando throughout the year, but perhaps the most impressive campaign that the team does is their work with local nutrition organization Hebni and their Fresh Stop Program.

Hebni is a not-for-profit community agency that was formed to educate high-risk populations about nutrition strategies to help prevent diet-related diseases, among many other initiatives. Their Fresh Stop program delivers healthy produce at a very low cost to food-insecure neighborhoods or “food deserts” in Orlando through its fleet of retrofitted city buses. A “food desert” is term defined by the U.S. Census Bureau, which tracks neighborhoods that do not have a major grocery story that carries fresh produce within a mile radius or median demographic income levels are unable to support shopping at a major grocer. The Fresh Stop program reaches about 90,000 people living in food desert areas throughout the greater Orlando area on a weekly basis. The Amway Center team has partnered with Hebni to donate fresh produce from its ongoing inventory and purchasing since 2016, upon hearing about the program from business partner Lee Wesley.

Largely driven by Amway Center’s Purchasing duo Doug Russel and Jim Laughlin, the Levy team at Amway has donated approximately 750 pounds of fresh produce to the Fresh Stop program each week, totaling over 120,000 pounds of produce over the past three years. That’s equivalent to about 60 tons of fresh healthy produce going to the people in Orlando who need it most. For Levy’s Vice President of Hospitality at Amway Center, Jan Michael Taylor, deciding to participate in the project was an easy decision.

“A lot of these residents don’t have any grocery stores near them and essentially live off of gas station food,” explained Jan. “For us to use our platform for such a vital cause like access to health food was a no-brainer and we’re really proud we get to be a part of Hebni’s work.”

Similar to Levy, the Fresh Stop program also has roots in Chicago. After hearing about an organization called Fresh Moves, which was delivering fresh food to food desert areas throughout Chicagoland, Hebni’s Executive Director Glen Providence had a gut feeling the model would be successful in Orlando, too.

“At Hebni, we had already done a lot of work around food access in low-income areas and trying to understand what those communities looked like from a nutrition standpoint,” explained Glen. “I loved the Fresh Moves model immediately and knew it would allow us to continue the work we were doing in a much more impactful way. Soon the city donated the buses and we were on our way.” When it comes to the Levy team at Amway Center, Glen says they simply couldn’t do the program without them.

“It was always key for us to be able to partner with organizations that could help, whether it was through produce or other contributions,” explained Glen. “Thousands of people are getting healthy produce and ingredients in their meals because of the Levy/Amway team. Without the fresh produce from Amway, we wouldn’t be able to operate the way we do now.”

Helping Educate the Next Generation

While the Amway Center team’s work with Hebni is remarkable in itself, believe it or not, that’s only one of the programs they participate in to make a positive impact on the Orlando community.

Each semester, Levy and Lee Wesley donates $10,000 to the Hospitality program at Valencia Community College, which then awards ten $1,000 scholarships to local community students pursuing a career in the hospitality and/or culinary industry.

Most recently, Jan and Managing Partner Arthur Lee were invited to this semester’s commencement ceremony, where they spoke to the graduates and received honorary medallions.

“A huge part of working with the local community is empowering the youth with resources to succeed,” explained Jan. “Our work with Valencia is something very close to my heart and something we look forward to growing for years to come.”

Changing the Paradigm of Sports Eating