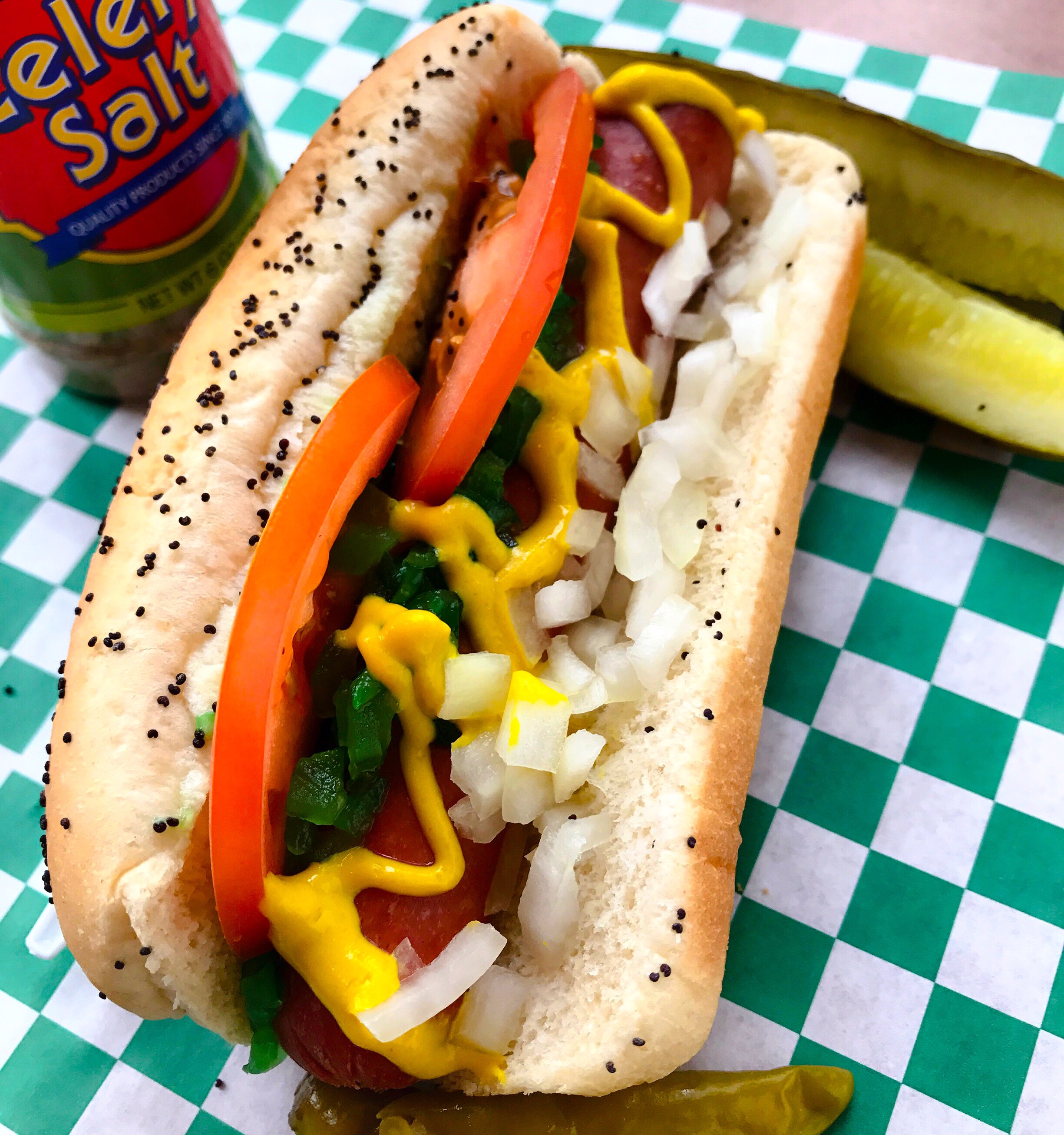 To celebrate July being National Hot Dog Month (and National Hot Dog Day on July 17), we’re launching a weekly blog series dedicated to exploring one of American’s most beloved foods. First up? A history of the iconic Chicago Dog.

Who was the first to make it? How did they land on those seven delicious toppings? We’ll answer those questions and more, so grab a Chicago Dog and get your hot dog history on!

To fully appreciate the Chicago Dog’s history, we should acknowledge the origins of hot dogs in both culture and literature. With centuries of historical references, (including mentions to them as “long sausages” in Homer’s classic epic, The Odyssey), hot dogs’ true origins will always be debated. However, we do have some facts that provide a good idea of when they first appeared in the U.S. Like many Europeans, Germans began migrating to the New World in the 19th century, bringing their own culinary traditions with them—that’s when the lovely wieners made their first noted appearance on North American shores.

Legend has it the first hot dog was sold in the 1860s from a German immigrant’s food cart in New York City. In 1871, the first hot dog stand was opened on Coney Island by German immigrant, Charles Feltman. In 1916, Polish immigrant Nathan Handwerker—an ex-employee of Feltman—opened Nathan’s Famous restaurant where his hot dogs would become known nationwide. The love for the new food grew throughout and across the country, and hot dogs started showing up on restaurant and stand menus; they even made an appearance on the White House menu in 1939, when Eleanor Roosevelt served them to the Queen of England.

The rest, as they say, is history. This favorite food has been a staple at backyard BBQs, July 4th celebrations, and ballparks throughout America ever since. The delicious hot dogs and their fervent following expanded west as German immigrants found homes in Midwestern farms and industrial cities, including our beloved Chicago. (In fact, by the end of the 1800s, ~25 percent of Chicago’s population was either first-generation German or born in Deutschland!) And that brings us to …

A true Chicago Dog has seven specific ingredients: chopped white onion, neon green sweet pickle relish, a dill pickle spear, a tomato slice (or wedge), pickled sport peppers, and celery salt, all sitting atop an all-beef hot dog on a poppy seed bun. So where exactly did this delicious dog come from? It all started with the beef.

It wouldn’t be a Chicago Dog without an all-beef hot dog. Simply put, the hot dogs that were popularized by German immigrants primarily consisted of any variation of pork, beef, and spices.

The all-beef hot dog proliferated in Chicago thanks to a wave of Jewish immigrants, who quickly realized that America’s craze for the little sausages made hot dog vending a great way to earn a living. Plus, with the subpar health standards of Chicago’s meatpacking industry at that time, many Chicagoans also believed the Kosher tradition produced safer, purer food. Boom. The all-beef hot dog was created and Jewish immigrants became masters of the Chicago hot-dog business. Like their fellow comrades, Jewish immigrants Samuel Ladany and Emil Reichl of Austria-Hungry saw the business potential in selling hot dogs and would go on to create Chicago’s favorite hot dog brand – Vienna Beef.

After a hugely successful debut selling hot dogs at the Columbian Exposition, Ladany and Reichl invested the profits into a formidable business. Naming their new venture after their motherland’s capital, Vienna Beef was proudly introduced to the world in 1893 and remains a Chicago staple today.

Another key Chicago Dog ingredient: the poppy-seed bun. The bun is a delicious detail that’s also a differentiator. You can instantly spot an authentic Chicago Dog by the presence of poppy seeds on the bun. This all-important detail wouldn’t exist, however, without the Polish immigrant, Sam Rosen. Rosen first came to New York and opened a bakery at the tender age of 16, eventually venturing westward to the Windy City. His eponymous business became a huge success both as the go-to rye bread spot for the German and Polish, and as the innovator behind a new type of bun with poppy seeds sprinkled on its surface. While the all-beef hot dog proved to be the foundation of the sacred Chicago Dog recipe, Rosen’s poppy seed bun would soon prove just as crucial for the iconic food in the years that followed.

After being a fan-favorite for years, the hot dog became more of a necessity with the arrival of the Great Depression in 1929.  While other businesses crashed, hot dog vendors thrived and became mainstays in communities throughout Chicago due to the cheap price of the meat and its capabilities as a filling, fairly well-balanced meal for penny-pinching families. To make the meal a bit more nutritious for Chicagoans, vendors began piling on the vegetables, like peppers and onions, sold from the other food vendors around them.

While many variations of hot dogs being “dragged through the garden,” were popular, it soon became clear Chicagoans had a favorite combo: sport peppers, mustard, pickle, relish, onion, tomato and celery salt on Rosen’s popular poppy seed bun. And thus, the legendary Chicago Dog was born.

While the recipe became a life-saving (and delicious) staple during the Depression Era, the popularity of the Chicago Dog would go beyond the city when American soldiers returning home from World War II began taking the famed tradition to the outskirts of Cook County and the suburbs as they left city life behind to start families. With hot dog stands becoming the center of new suburban communities, the famed Chicago Dog quickly found its place outside of Chicago and has been an iconic part of the city’s culture and culinary experiences ever since.

Today, the Chicago-style Hot Dog is beloved by hot dog lovers, sports fans and foodies across the country, inspiring different regions of the U.S. to take their own spin on the famous recipe while becoming more inventive in their own style of hot dogs.

Well, there you have it! Share your newfound Chicago Dog knowledge with friends and enjoy a Chicago Dog in celebration of National Hot Dog Month. And remember to come back next week for our post about the new hot dog recipes baseball fans will see at major and minor league ballparks this season.

Plant-Based Dishes That Knock It Out of the Park